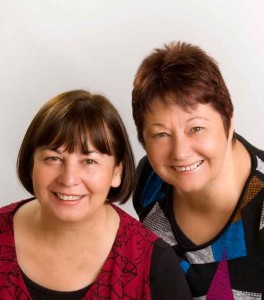 We are represented by agent Caitlin Blasdell of Liza Dawson Associates.

Like a lot of authors, we’ve racked up some long years in our writing apprenticeship, and there’s still lots to learn.  That trunk under the bed full of our earlier novels is pretty full. At first, we wrote individually and passed our stories on to the other for first review, but years ago we both realised that ‘team us’ wrote a lot better than either of us did as individual writers. Now we can’t imagine not writing as a team.

We write together, but each of us has a very different role, and the role changes depending on the book we are writing.

I’m the driving force behind this web-site, the one who took the idea and ran with it, so you’ll hear more from me than you will from Sherylyn. Because of this you will get quite a skewed impression of how we work together. Can’t help that, unfortunately.

I’m big into science fiction and fantasy, and also enjoy mysteries and technothrillers, and love it when a mystery is combined into a sci-fi or fantasy

Favourite authors change, obviously, depending on the mood I’m in, but they include Diana Wynne Jones, C. J. Cherryh, Charles Sheffied, Vernor Vinge, Joan D. Vinge, Connie Willis, Anne Leckie and Robin Hobb (but funnily enough, I haven’t been able to read a Megan Linholm through yet).

Although I write the occasional blog, you’re more likely to find me on twitter (@skdunstall) or even, occasionally, on Facebook.

When writing, I listen to movie themes. In particular, Hans Zimmer, John Williams, Howard Shore and Kerry Muzzy. When I need voices I like Sarah Brightman, Ronan Keating, Meatloaf and Bonnie Tyler.

My reading tastes are similar to Karen’s although I read more mystery, thrillers and urban fantasy than she does.

A quick note on the spelling, as we’re writers and you’d expect us to get it right. So in general, you’ll get Australian spelling. That’s more along the British lines than the US. ‘Colour’ rather than ‘color’, ‘licence’ as the noun, ‘realise’ rather than ‘realize’, and so on.

Except, we do write for a US publisher, and often after editing our head is in still in US-English mode, and we don’t realise it.

Which is to say, the spelling is all over the place.