If you’re not part of the solution …

Right now the Australian government ministers are behaving like kids in a classroom, where the teacher has left the room, and been gone for a while. Calling each other names, doing stupid things, bullying, offending our nearest neighbor.

We’re waiting on an envelope in the mail to vote whether or not we want to allow same sex marriage, but even if we all vote yes (I’m voting yes), that doesn’t necessarily mean the government will allow it. It just means that that the government will introduce a bill to allow them to debate whether or not to allow same sex marriage. It also, I think, allows members of parliament to vote as per their own conscience, not along party lines.

Confused? So am I.

We haven’t even got problems, compared to other countries.

I don’t have to mention the United States, where it seems that the craziness has escaped the confines of the White House and infected the populace. We’re hurting for you.

It seems like whole of the democratic world has been infected by … I don’t know what you’d call it. The pendulum, having swung one way, is swinging madly the other way. It feels a lot like Galloping Gertie right now, ready for that final swing.

On a more positive note, Anne Leckie’s newsletter dropped into my email the other day. Provenance is out in just over a month.

I like the way Anne does her newsletters. Only when she really has news. And she put the first three chapters in the newsletter. Yes! (Lots of exclamation marks here.) We might try this ourselves.

Naturally, I read the excerpt immediately.

There are characters you take to immediately, and I love Captain Uisine. He’s not the protagonist, so I hope he’s in the book more than just two chapters. 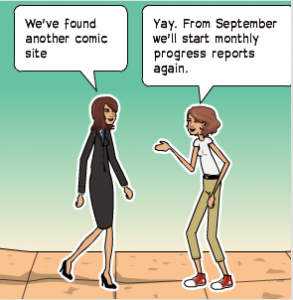