Here are some that we read in 2016, and liked. Not all of the books are new, they’re just books we read. Some were re-reads.

A reader on our blog recommended these, so we thought we’d take a look. Thirteen books later … yes, not too bad. 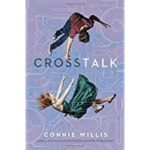 My favourite Connie Willis novel is To Say Nothing of the Dog. My favourite short stories of hers are those like All Seated on the Ground. Crosstalk is in the same vein. I enjoyed it a lot.

The first few chapters the writing is so fast paced I almost ran out of breath reading it, but it settled. A good, fun Connie Willis story which also says some pointed things about social media and society.

(Someone described Genevive Cogman’s Invisible Library as Jim C. Hines’ Libriomancer crossed with Willis’ To Say Nothing of the Dog.  Guess what’s on my to-read list this coming year.)

Sherylyn read, and loved, both Anne Bishop’s Marked in Flesh and Robin Hobb’s Fool’s Quest.  I haven’t read either, as work was super-busy during those months, and any spare time was for book deadlines. I’ve got them both saved up to read when I take leave in March, now.

Last year we rediscovered Tanya Huff’s Valor series as eBooks, and re-read them. We’ve always liked this series. Highly recommend it to anyone who’s looking for a light introduction to military fantasy.

Note how many of those books were by female authors. Most of them.

We don’t deliberately go out of our way to read books only by women. In fact, there are a couple of books I’m hanging out for. One of them is Curtis Chen’s Waypoint Kangaroo.  Which has been out in hardcover for six months now. It’s A$35, which is more than I want to pay, given I can buy three, or more, eBooks for the same price.

In the US you can buy Waypoint Kangaroo as an eBook. Here in Australia we can’t yet. In the last twelve months it seems that rights have changed, or DRM has been tightened. Or maybe publishers are changing the rights they buy, and only buying North American rights for electronic books as well.  I’m not sure what, but all I know is I used to be able to buy pretty much anything I wanted as an eBook off Amazon.com (as an Australian, with an Australian ID and address).  Now I can’t.

John Scalzi’s Collapsing Empire (a book I want to read when it comes out) is another book I can only buy in hardcover, not as an eBook. Yet I can see from the Barnes and Noble site that there is an eBook version.  Here in Australia we can’t buy B&N books.

I’m sure there’s a reason, but it’s frustrating to see all these books you want to read, but can’t get hold of except at very high prices, and only as paper. Especially when you know others can get them electronically.

Looking forward to next year 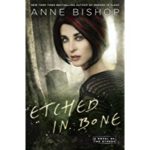 I’ve already mentioned Robin Hobb.  Her third book will be out.

Sherylyn’s waiting for Anne Bishop‘s Etched in Bone. It’s on her must-read list.

Waypoint Kangaroo, if I can ever get a copy. I have wanted to read this book ever since Chen posted his query on Janet Reid’s Query Shark. A long, long time ago.

Revenger, by Alistair Reynolds. I like the idea of this one. Sounds like Forerunner* stuff, which obviously we love, given our own stories.

I also heard that the new Anne Leckie is due out this year. I haven’t seen any confirmation of that, but if it is, I’ll be in line.

Every year The Qwillery has a debut author challenge, where they challenge you to read a debut author a month. I find a lot of interesting books here, but I don’t tend to read them until a year or two after they’ve been out.

* Forerunner, with a nod to Andre Norton, who came up with the term that means rediscovering the advanced technology of ancient (often alien) civilisations.

2 replies on “What we read this year”

I like this post, I’m very stuck in my ways and struggle to get into new authors without some serious recommendation so been looking at The Qwillery DAC and think I might give it a go to broaden my horizons – thanks for the heads up.

On another point (well mixture of two really) I so want to read Marked in Flesh by Anne Bishop but I am loathed to pay what is four times the average e-book price I usually pay. I’m in the UK and I wouldn’t pay £12.99 for a hardback book and I get a physical copy at the end of it (I love holding a proper book but my e-reader takes up so much less space! lol)

This is actually the case most times with The Others books by Anne so I’m usually reading them over a year after they come out when mass market is released and they bring down the cost of the e-book (First World problems eh?)

Right I’m off to start a book I’ve picked up of Qwillery – wish me luck.

I agree there’s a price point on books where I stop and don’t buy.

We (Sherylyn, anyway), read the first two Anne Bishop’s from the library, and didn’t buy them until the price went down. (Paid full price for the next, though.)

The local library takes recommendations, so sometimes when I’d like to read a book but it is too expensive, I’ll put in a recommendation. They don’t always buy them, but I get to read a lot more books that way. Other people do too.

Agree with you about paper books, but as you say, the eReader takes up a lot less space.