A picture is worth a thousand words, they say, and it’s true. 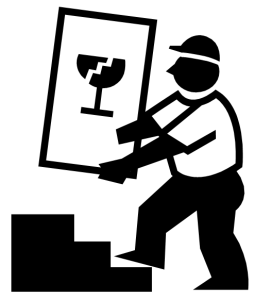 If you had chosen to write the warning instead, what would you have written? Maybe something along the lines of:

This package contains glass. Contents are easily breakable. Handle with care. Always carry right side up.

Why write words when pictures convey the message so much more simply?

Words themselves are becoming simpler. We have come long way from Chaucer’s middle English:

(Taken from the modern-day post “Whan that Aprill” Weekend on the Geoffrey Chaucer Hath a Blog blog site. I’d credit your name, sorry, but I can’t actually work out who you are. Great blog site, by the way.)

But we have also come a long way from what we recognise as modern day usage as well.

Thirty years ago, Marseilles lay burning in the sun, one day.

A blazing sun upon a fierce August day was no greater rarity in southern France then, than at any other time, before or since. Everything in Marseilles, and about Marseilles, had stared at the fervid sky, and been stared at in return, until a staring habit had become universal there.

While some people do still attempt to write like Charles Dickens, most of us have simplified our language, so that it is doubtful if a book with such heavy language would get past the agents enough to be recognised as the good story it may be.

The words have become simplified. “Ich must demaunde yower pardoun” from Chaucer’s time becomes “I must demand your pardon” in Dickens’ time, and “I am sorry” nowadays.

Even spelling is being simplified. “Colour” is slowly becoming “color”, no matter what we English spelling purists think, “Programme” is now generally “program”, and so on.

If we follow the trend to simpler words, and then on to images replacing words, what do we end up with?

Iconised images and very simple words as the major form of written communication.

I wonder what an archaeologist 5,000 years in the future will think, digging up our civilisation from the ruins of whatever has grown on top of it. Will they think us a simple people, with only the rudiments of written language, because we work mostly with pictures and simple words?

0 replies on “Symbols and simpler language”

The reason is that most readers for these books are from the US or Western Europe. And people like to read about protagonists that are at least understandable to them, and preferable about protagonists that they can identify with. Most SF readers come from the western culture and would expect to find a protagonist from another colture hard to identify with. Thus people would be less interested in a book with such a protagonist. So it’s mostly a question of sales.
that’s my opinion, anyway..

I’d like to think the names will change so that they’re not obviously rooted to this time and place. Back before the United Nations there was the League of Nations and before that the Concert of Europe and so on. I can’t see organisations like this lasting in the same name and same guise for another 1000 years.