Last week,I gave you six bots and asked if you knew which books they were from.

Once upon a time there was a cyborg. That’s me.  You might think my life is a fairy tale. I can tell you it’s not.  I live in New Beijing with my stepmother—who hates me—and my two stepsisters. The stepsister I adore is dying of the plague. 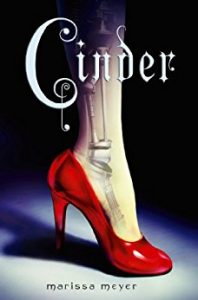 Cinder, from Marissa Meyer’s Lunar Chronicles series. More specifically, the first book, which was called Cinder. This is a retelling of fairy stories as science fiction.  Including an evil queen (the ruler of the moon).  Book one was Cinderella’s story.  She had an artificial foot.

In the Lunar Chronicles anyone with artificial appendages (like the foot) is a cyborg, and considered sub-human.

We’re here to solve a murder.  The New York detective I’ve been partnered with doesn’t trust Spacers. Or robots.

He’s from overcrowded Earth, where they hate robots because Earth people believe robots take jobs humans could do. 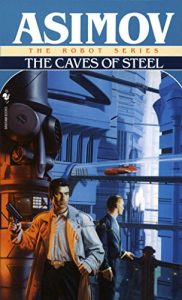 This was R. Daneel Olivaw from Isaac Asimov’s Caves of Steel. It’s probably the first robot book I ever read, and Elijah Bailey and Daneel Olivaw were probably my two favourite Asimov characters ever.

“I could have become a mass murderer after I hacked my governor module, but then I realized I could access the combined feed of entertainment channels carried on the company satellites. It had been well over 35,000 hours or so since then, with still not much murdering, but probably, I don’t know, a little under 35,000 hours of movies, serials, books, plays, and music consumed. As a heartless killing machine, I was a terrible failure.”

This one is a direct quote, which I will attribute next week, but I love it so much I’m quoting it verbatim. This is also a really great start to a novel. 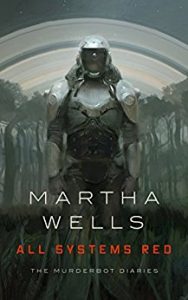 Everyone’s favorite murderbot. Ranks up there with bonus bot (below) as one of my two favorite artificial intelligences of all time.

The SecUnit from Martha Wells’ Murderbot Diaries.  Book one, All Systems Red, won a Nebula for best novella this year, and it’s a Hugo finalist as well. I, personally, am voting for this on the hugos. I love Murderbot.

I am 50,000 times more intelligent than a human, and have a “brain the size of a planet” which I seldom get a chance to use. I was built originally as one of the (many) failed prototypes of Sirius Cybernetics Corporation’s GPP (Genuine People Personalities) technology.  I’m bored. Maybe a little depressed.  People have called me paranoid, and manically depressed. I’m just stoic, patient even.

“Do you want me to sit in a corner and rust, or just fall apart where I’m standing?” 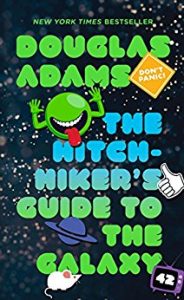 Marvin the paranoid android from Douglas Adams’ The Hitch-hiker’s Guide to the Galaxy.

Alan Rickman played Marvin in the 2005 movie of the book.  We didn’t see it, for some reason, but I can imagine Alan playing him. He’d do it so well.

I used to be a ship AI, but things went wrong and I had to do a hard reboot. Now I’m in a body. That takes a bit of getting used to. It feels cramped, and tiny. I can’t remember what happened before. 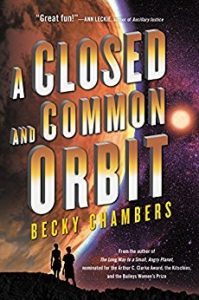 I thought some people might have chosen Breq (bonus bot) for this one, but they didn’t. This bot is Lovelace, aka Sidra, from Becky Chambers’ A Closed and Common Orbit.

For a bonus point

I used to be a ship. I controlled thousands of human bodies. My ship was destroyed. All that’s left of me is the one human body I am in now. This body sings. Badly. 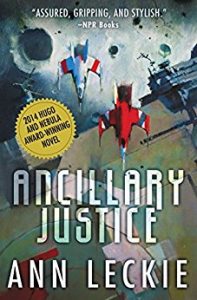 OH I thought this one “I used to be a ship. I controlled thousands of human bodies. My ship was destroyed. All that’s left of me is the one human body I am in now. This body sings. Badly.” was The Ship who Sang by Anne McCaffrey. I loved Becky Chambers books until Lovelace’s death, and I really didn’t like that and how it played out and haven’t got over it enough to read the next one. Murderbot was a great, great book. Thanks for the remembrances!

I wish I’d remembered The Ship Who Sang. That would have been a great one to include. I so loved all of Anne McCaffrey’s books.

you need to read the next book. I read them back to back and it was good.

I got the first book a couple of months ago. I’ll have to move it up in my TBR pile.