One of our favourite Star Trek media is the Pocket Book, Ishmael, by Barbara Hambly.

It was a crossover novel. Or, if you prefer, a mashup before they had mashups.

And then Barbara Hambly wrote Ishmael.

In it, Spock goes undercover to infiltrate the Klingons, is caught, and transported back to 1867 Seattle, where his ever-so-great maternal grandfather (Mark Lenard as Aaron Stemple) has made a deal with mill owner Joshua Bolt to bring out a hundred women as potential partners for his workers. The catch—all the women are to have husbands within twelve months or Bolt loses his mill to Stemple.

It’s a beautiful book. As a Trekkie you get a Spock/Kirk book. As a Spock fan you get Spock with amnesia, trying to fit in to a society that is totally alien to him. Much like Spock in Spock’s own time, really.

As a fan of Here Come the Brides you get to see a totally different Aaron Stemple. One that stayed true to the man, but also peeled away different layers, so you saw the real man underneath.

As writers—although we didn’t realise back then that we were even dissecting the story as writers—the story was satisfying on so many levels. Everything was logical (if we can use that word). 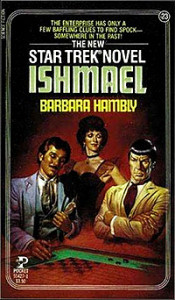 Spock loses his memory because he has nothing in this new world that he can associate with his old life. As soon as he sees a Klingon his memory returns.

The Stemple/Sarek/Spock circle is just perfect.

And, of course, James T. Kirk has been working frantically in the background and arrives just in time.

Leonard Nimoy—as Mr Spock you were part of our life. We thank you for it.