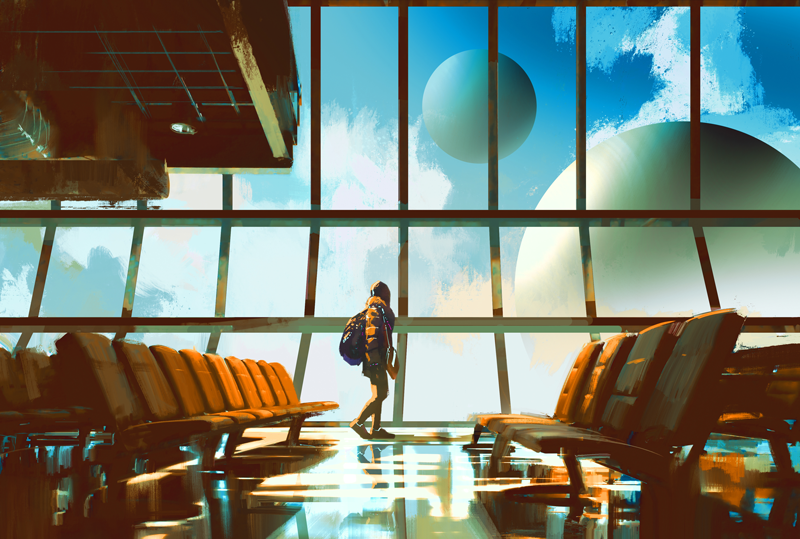 I’ve been thinking the blog I wrote a couple of weeks ago, about how when you read a book at the wrong time it doesn’t appeal, but if you read it at another time, you love it.

I was a voracious reader, but I was never one of those people who as a teenager found a book that changed my life. I have friends who did, but my childhood reading was a blur.  It was a mix of the old books we had around the house—Enid Blyton, the Bobbsey Twins, Hardy boys when we were younger.

A lot of these books were written before I was born.  I think I remember them because they were what we had on the bookshelves at home. Our whole family were voracious readers. I’m sure Mum and Dad scoured second-hand shops for us, for we had books from the early 1900s to those of the current day.  (I remember a most glorious early edition of Ethel Turner’s Seven Little Australians, from about the 1920s. It was a beautiful book and we read it to bits.)

As for science fiction, I read it all.  Not counting the Simon Black books (which we had at home), most of these I got from the library.  I know I read the big names. Robert Heinlein, James Blish, Isaac Asimov, Arthur C. Clarke, John Wyndham, Poul Anderson, Philip K. Dick, Larry Niven, but I don’t always remember their stories.

I remember pieces of them, like the start of Heinlein’s Orphans of the Sky, but sometimes I only remember the covers.  The brown triffid on Wyndham’s Day of the Triffids, the yellow Gollancz hard covers from the school library.

Isaac Asimov was probably the one writer I remember well, and still re-read.  Who can forget Nightfall? Or Elijah Baley in Caves of Steel? Or even The Stars, Like Dust (but don’t get me started on the McGuffin they were chasing).

What surprises me is the early books that stay in mind are (mostly) those I read as an adult.  Not only that, there’s a high proportion of women writers among them.  Anne McCaffrey, Andre Norton, C. J. Cherryh, Joan D. Vinge.  (Norton I read earlier.)

I’d add Asimov and Charles Sheffield in there as the only male writers whose work I actively remember from my childhood/early adulthood.

I remember a lot more of the modern stories I read.

2 replies on “If you don’t have a life-changing book, what do you remember reading?”

oh wow, this brought back memories. When my Dad was a poor college student in the 70s, Mom would take us to the used book seller on the corner. My twin and I would pick out books for a ten cents to a quarter apiece. Books that were 50 to 60 years + older than we were. Bunny Brown and his Sister Sue series, the original Pollyanna, Heidi, Alice etc. Bobbsey Twins, Nancy Drew, Trixie Beldon, Cherry Ames, everything by Louisa Mae Alcott and Laura Ingalls Wilder, the Five Little Peppers, another girl detective series from the early 30s that I can’t recall but know what the covers looked like, maybe Judy something) Dana Girls, etc. And the library once a week where we read everything in the “kids” section so started in on the adult sci-fi section and read that all too. The series I tend to remember the characters but not individual books. One book that stayed with me was Madeline dEngle’s A Wrinkle in Time. I loved that book. Reread so many times. I heard there is a movie coming out, I’m almost afraid to see it in case it does not live up. Island of the Blue Dolphins is another I read then a handful of times, but that stuck with me. Thanks for the memories!

They used to store the kid’s books in boxes under the book table. We’d crawl under there (even as we got older) and take ages going through them.